You know you are loved.....the quiz 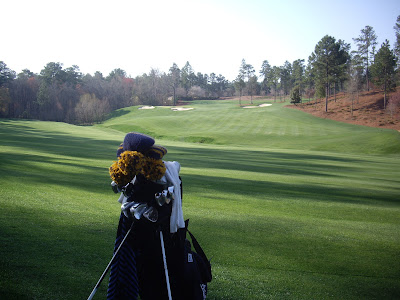 when your wife knits you homemade head covers for your golf clubs.....(in the colors of your alma mater) 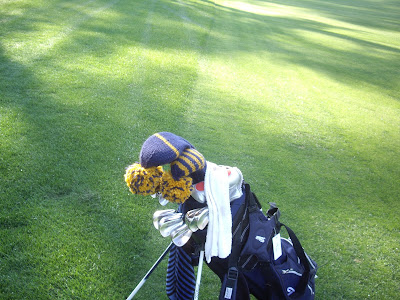 What university did I attend?

And for your bonus:   Where are my clubs? 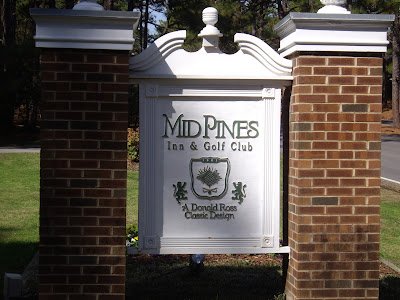 On your next trip to the Pinehurst area, be certain to visit Mid Pines Golf Club.  The course exhibits as many original  Donald Ross features as any I have seen.  Playing angles are emphasized, bunker placement is strategic and the greens are undulating, firm, and fun.

Mid Pines epitomizes golf in the Sand Hills region of NC  There is an undeniable sense of place and the course feels comfortable and well suited to its environment. 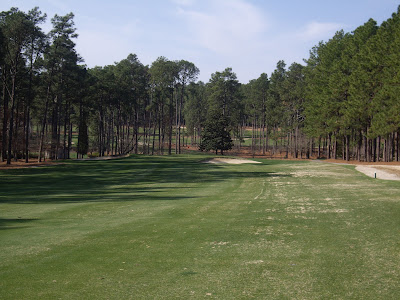 (the unmistakable look and feel of the NC Sand Hills)

Mid Pines is a wonderful walk and I encourage you to load up your walking bag and stroll down its  fairways. 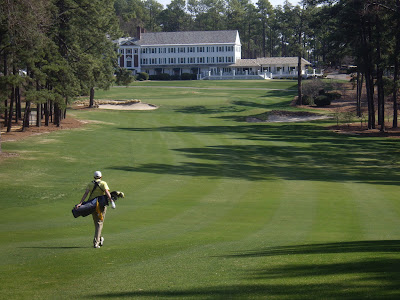 (Matt strolling up the 18th with the Clubhouse/Resort in the backdrop this past Sun. morning)

The course also offers a great bargain for those traveling with the family.  A junior golfer plays free with full paying adult green fee!  Call or email and we'll make all the arrangements.  Pictures of Pine Needles, right across the street, coming to this blog, one day soon. 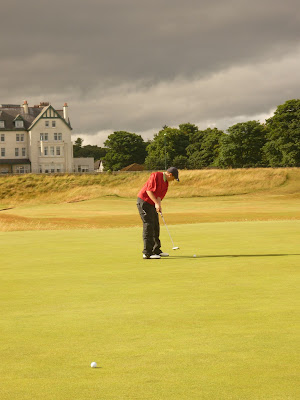 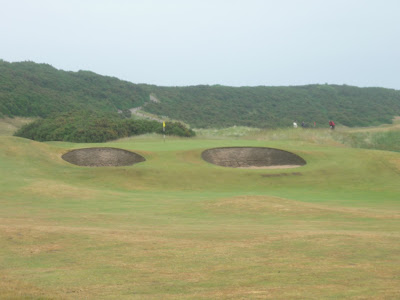 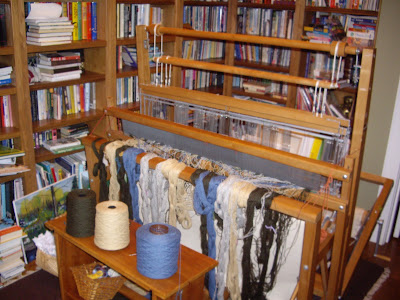 Posted by Bart Bradley at 6:00 PM No comments:

Well, believe it or not, I met Arnold Palmer this weekend at Bay Hill.  We were warming up on the range before our round when our magnificent host waved his hand asking us to come closer.  Our host was standing and chatting with the King!  We were introduced with a hankshake and Mr. Palmer was as kind and cordial as a man could be.  He was incredibly nice to us.. After meeting him, it got me thinking about Arnold Palmer designed golf courses.....

My favorite of all Palmer designs is Tralee, a fantastic links in southwestern Ireland.

The back nine, in particular, weaves in and out of huge dunes.

Tralee is the sort of place that makes you want to come back to enjoy the spectacular setting and fun golf. On your next trip to Ireland, don't miss Tralee.
Posted by Matt Bradley at 3:47 PM 1 comment:

The Person Who Kicks It into the Cow Field….

A year ago we were getting ready to take the children to Paris.  It was going to be their first trip to France, and I prepared them in my usual way by forcing them to listen to French languages CDs anytime we were driving anywhere in the car.  After a month of repeating Bonjour and Merci as I shuttled them back and forth, they could at least manage the minimum standards of Parisian etiquette.  This is important; the French are sticklers for etiquette.  When you go into a French shop, the first thing you do is look the shopkeeper in the eye and say good morning.  In French.  When you leave, you say goodbye, again rather formally, even if you've only been in the shop for thirty seconds and are not interested in buying a single thing.  It's not hard, and it matters. 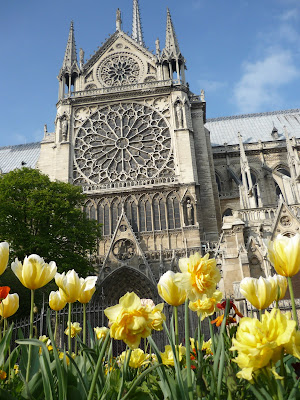 (Ahhh...April in Paris, Cathedral de Notre Dame de Paris)
(photo by Katie Bradley)
Knowing a bit of another language is always a good thing, and my language CDs have done me proud.  In Florence I was able to ask the guard at the Pitti Palace why all the statues of male gods had their penises hacked off (apparently, the widow of one of the Medicis ordered it done--some day I have got to hear  the rest of that story); I was also able to buy gnocchi to bring home on the plane (it's true that the man wouldn't sell it to me until he approved of my pronunciation, which took awhile, and also true that I had to resort to whole-body sign language to convey vacuum-packed for the airplane , but we managed).  In Costa Rica I was able to ask, in Spanish, "How do you say 'iguana' in Spanish?" only to be solemnly told, "iguana".  I was also able to use the phrase "It is the blue truck," much to my delight, as it won me a bet with my son, who thought that was the most useless of all the phrases on the Spanish CD.  And I successfully ordered us pizza, soda, and red wine, in a restaurant in the middle of nowhere.  The pizza came with mashed potatoes on it--but that could have happened to anyone.
But sometimes you don't need to know the language, or even the local culture or rules of etiquette.  Some things are universal to our humanity.  When we were in the Osa penisula, the most remote part of Costa Rica, we were able to visit a very small local school.  We visited during recess; while the adults toured the single classroom, a dozen children, including all the students of the school and my son and daughter, who were ten and seven years old, played soccer in the school yard.  I looked out the window to see my son make a wild shot.  The ball flew over both the goal and a barbed wire fence and landed in tall grass among grazing cows. 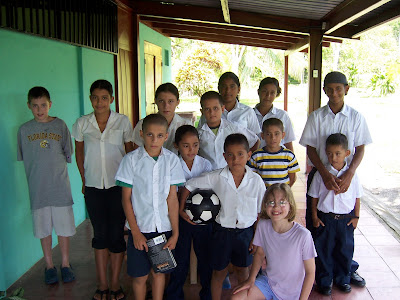 (the Bradley kids, students at the Carbonera School, and the actual soccer ball)﻿
The children stopped running, and looked at my son.  My son sighed.   He trotted to the edge of the field, ducked between the wires, shooed away a cow and retrieved the ball.  Later, back at the resort, he said, "That's always the rules, Mom.  The person who kicks it into the cow field has to go into the cow field to get it. You know," he added, "those kids were exactly like us.  We were really just the same."
I travel to see interesting places--Paris, the Pitti Palace, the Osa.  I travel to taste new food and hear new languages and see things I can't see in my home country.  But more importantly, I travel to make my  own world larger and the actual world smaller.  I bring my children so that  they can come to understand that, where it really counts, we are all the same.


guest blogger:  Kim Bradley
enlarge your world, contact us at inquiry@bradleygolftravel.com
Posted by Bart Bradley at 8:52 PM No comments: